FWP by Rae > BLOG > Travel > A Pitstop in Paris

A Pitstop in Paris

A Pitstop in Paris

A Pitstop in Paris – 24 hours in Paris

In my line of work, it’s important to gather as much inspiration as possible, and although watching programmes, reading books/magazines and scrolling Pinterest may be somewhat useful, there’s nothing better than getting out there and people watching, especially in different cities in different countries.

I have always taken inspiration from others, I love people watching, and I can sit for hours just watching the world go by and appreciating other people’s style. And not just people, architecture, street signs (I’m a sucker for a sign), flooring, anything goes. If it catches my eye, it gets snapped and filed. 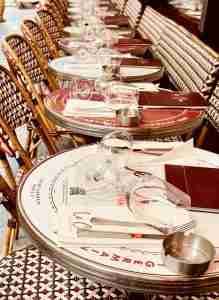 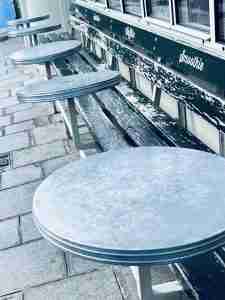 However, in the last few years I’ve been deprived of this (nothing life changing just irritating single parent circumstances) so I put a lot of effort into making this trip happen. Unfortunately, I could only get 24 hours – literally a Pitstop in Paris – so we really needed to make this work.

I haven’t been to Paris in quite a few years, not without kids anyway which doesn’t count, so a little bit of research was done, but mostly we focused on picturesque photo-worthy districts (errr, all of them), smaller boutique shops, and places all walkable to each other if possible.

First I needed to find the hotel. I knew I wanted to be near St Germain, a beautiful district with lots of character, cafés and restaurants. You can walk to a lot of places in a short space of time and as we only had 24 hours in Paris, I knew we wouldn’t be trying to cram in Montmartre but may make it to Musée du Louvre (we didn’t).

I hadn’t realised it was the last day of Paris Fashion week, so hotel prices were a little bit higher, and as there were 2 of us with  photographic stuff we needed a decent size room.

My friend Rachel told me about a lovely place in St Germain called Hotel Saint-André des Arts, however it was too expensive at £400 BUT I have since looked again at other dates and it is available for under £200 on some dates so I’d definitely explore that option when returning.

In the end, after searching on Booking.com via the map function, I settled on a recently refurbished boutique hotel Hôtel Le Presbytère, just north of the Seine, quite near Hôtel de Ville metro station and very close to the Centre Pomidou.The hotel is about a 10 minute walk from the Pont d’Arcole which will take you across to Notre-Dame.It’s an old small medieval building with a long steep winding stone staircase. The rooms are all old stone and have kept their beautifully exposed beams and gothic architecture, mixed with modern fixtures and fittings. There are only 11 bedrooms and ours had a view of the streets below. We took the deluxe which start at €289, although we had a discount added along with breakfast. 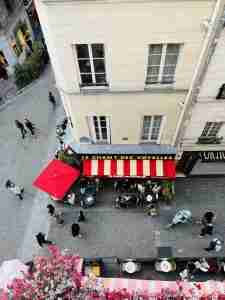 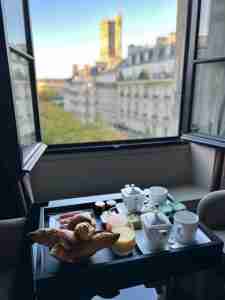 It was also only a 10 minute walk from the station (Châtelet les Halles) which is on the line direct to the airport via Gard du Nord (if you were getting Eurostar). It takes around 30-40 minutes to get to Charles de Gaulle airport depending on whether you get the fast train or not.

We flew with easyjet from Gatwick because it was much cheaper. As we only had just over 24 hours, we wanted to be there early morning and leave late afternoon the following day, and Eurostar were charging a small fortune for these times of day, so living near Gatwick, flying was a better option for us.

Once landed in Charles de Gaulle, we took the RER train (€10.30 one way and easy to find as it’s clearly signposted) and took the Paris train, getting off at Châtelet-Les Halles, the stop after Gard du Nord. The fast train is about 20 minutes, but we got on the slow which was around 40.

IMPORTANT NOTE: When you buy your tickets make sure they never touch your phone or a credit card, it can wipe the bar as I quickly found out when I couldn’t get through the barrier, so you then have to go to the ticket office to get a new one, wasting precious time! 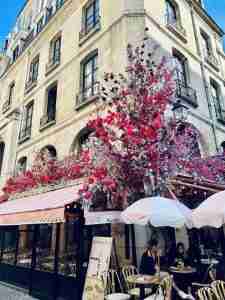 A short walk from the station and we were in our hotel, which sits above Le Paradis café and all its floral glory.

We immediately headed out, aiming for the river as it was such a beautiful day. We stopped off for a quick lunch in one of the many bistro along the way before heading into Samaritaine department store. I had read that it was a cross between Selfridges and Dover st market. If you have the budget it’s a beautiful store where you can buy from Ganni to Gucci but it wasn’t anything I hadn’t already seen before in London, so we flicked through some Assouline books (I picked one up with one hand and nearly broke my wrist they are so heavy, but extremely beautiful) and if I had a coffee table I’d be buying one, probably Jaipur Splendor which was breathtaking.

We then decided to head over the bridge and just mooch about to get our barings. Always a stunning door in sight we had some good photo backgrounds. 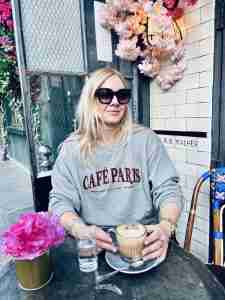 We decided to head over into the 4E arr and look in the smaller shops, stopping off again in one of the many pretty café adorned with huge floral display (of which there are many).

I’m a member of the Soho House group (or should I say ‘was’), so, as they had opened a branch in Paris this year, and as we were absolutely shattered and needed a ‘didn’t have to think about it’ glamorous evening, I figured it was a safe bet. How wrong I was.

We decided to get the Metro up to Chaussée d’Antin-La Fayette and walk the other 10 minutes. However, once we arrived at Châtelet metro, each entrance only allowed metro card holders through to the trains, but we needed tickets. We spent about 10-15 minutes wandering around trying to find each entrance to the station, most saying exit only – however, after much head scratching we ended up going into an exit only just to see. Alore! this is where we found the bloody ticket machines! Basically ignore the ‘exit only’ signs as bizarrely this is where you can get tickets!

Once we arrived, en-route we walked past many bustling restaurants and cute bistros which I now wish we had stopped at. The building of Soho house is beautiful but the service is appalling, the staff chaotic and the food just rubbish. I love steak tartare yet it was by far the worst I’ve ever had. You aren’t missing anything by not going. 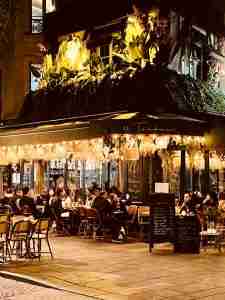 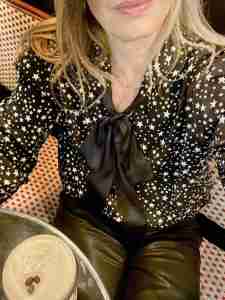 After getting fed up with the diabolical service, we decided to leave and walk all the way back to the hotel. As we wandered down Rue Montmarte we stopped for a cocktail in a place called Le Tambour. We then carried on our journey by foot, heading down Rue Etienne, eyeing up all the places we could have gone (I have linked them, they all look fabulous). Another that looked inviting was Lézard café followed by Poulette further down the same avenue. A really small yet pretty place with stunning décor which I’ve since looked up online and has great reviews. Gutted. 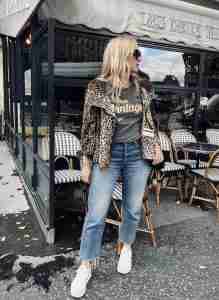 The following day we decided to head straight to St Germain. Again we walked, stopping off at Café Flore, one of the oldest café in Paris. Its fame is reflected in the prices so we just had a glass of wine and headed on our way. We wandered the pretty streets just taking in the scenery. We found a small street, almost alleyway, called Rue du Commerce where there were a cluster of little bistros. A tiny one that stood out was called Cepe & figue.   It looked very small inside and the kind of place you would go and find a corner and lose a few hours with a bottle of red some steak frites and a book. Another added to the list of ‘places to dine’ when we come again. As time wasn’t on our side, we headed to Sezane ( a must, everything in there is gorgeous and a great price for the quality) then back to our hotel, passing another bustling place I marked down for a future lunch called Café Buci. We then headed off to the airport.

It really was a whirlwind trip, but I know for certain that next time we will have a much clearer idea of how to spend our time and where to go, and of course where to avoid.

What I wore on my trip (Blair star blouse coming SOON)